Well for the last few years, the 24th of July means flying at the Pioneer Days Fly in located in central UT.  This fly in offers some of the highest drive up mountain sites in the state.  The idea of launching from 11,200′ on the top of Monroe was too good for the Skywalk USA Team to pass up.  Many of us have flown this before and it doesn’t disappoint.  Clark, Jeff and I made arrangements to stay at the KOA and as it turned out we had quite a group of pilots also staying there.

The first day we arrived (23rd) there was a lot of over development and moisture and it ended up dumping on us at the campground.  We found refuge under a metal pavilion but the rain was so heavy we couldn’t even hear ourselves talk.  We knew flying was out of the question but the organizer of the fly in, Stacy, being the extreme optimist he is, reassured us that it would clear and we would have great flights from Cove above Monroe.  As it turned out that rain was just what we need to cool the valley and mellow the wind.  We headed up to the launch with some of the other pilots from the campground and got to the top about 20 minutes before sunset.  We knew that the window was short so Jeff and Clark rushed off for a smooth sunset sledder over the town. 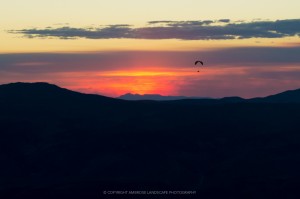 The following morning, the plan was to meet up and head to Monroe Peak for a 5000′ vertical sledder over the the town and parade route but as we woke we all knew by the looks on each others faces that it wasn’t going to happen.  The winds were 18 gusting 26, and that was from a gauge that sits at 9k not 11k where we were going to launch.  So we decided to soak in some of the local festivities in Monroe and enjoy the pancake breakfast they put on.  One thing that I’ve noticed the last few years is, wether we fly or not the locals really open up and welcome us.

Throughout the day a newer P2 pilot who flew he and his wife by helicopter from Logan offered to take us all on rides around the valley.  Clark  and his family had smiles from ear to ear when they got back.  Clark even climbed in his strongest thermal to date while in the heli, over 2000′ feet a minute above Cove!  We had great discussions among some of the other pilots about weather and XC flying.  Jeff gave a great display of how slack lining should really be done.

That evening we would launch from Cove again, over to the school where hundreds of locals would cheer as we land close by and watch the fireworks…at least that was the plan.  We again watched as the wind gauge read 15 gusting to 28.  We decided we might as well give it a look.  when we got to launch there were all ready a few gliders in the air that were parked and not making any head way.  We thought NO WAY!  Call us crazy but launching in 20+ mph winds while gusting even higher in the mountains is not our cup of tea.  We did how ever offer support to a local hang glider and watched some poor souls get tossed and drug around launch before coming to there senses and packing it up.  It seemed as the evening progressed so did the speed of the wind.  We chose to be observers and caution on the side of safety and drive down, eat hammers with locals and enjoy the Pioneer Day fireworks. 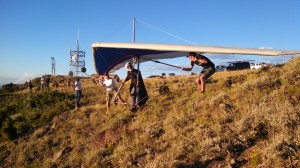 The following morning we had to get in the air.  We were anxiously watching the gauge hoping for good numbers.  When we woke up it was still strong, but at about 8 am we got what we wanted.  Winds were 8 gusting 14.  We were all like rats trying to get off a sinking ship, all scrambling to get our gear in the trucks.  We were off. This was going to salvage our trip.  As we were driving up to the top of launch we stopped at a lower spot, about 800′ below the peak, to check the conditions.  We liked what  we saw but we thought a trip to the top was worth checking out.  As we got out of our trucks at the top we knew it was to strong for us, so it was the lower launch.  It was happening!  After 2 days of being grounded we were going to get our feet in the air! 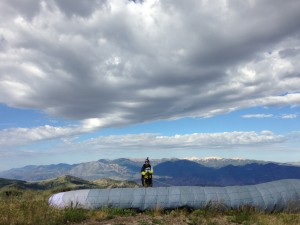 We laid out over the rocks and sage brush-heck nothing was going to stop us that morning.  Jeff and I launched while Clark being the great mentor he is stayed behind to help a few newer pilots off the mountain before launching himself.  As I was soaring out to Monroe I was once again reminded how lucky I am to fly.  There has never been a moment while flying that I haven’t reflected on that fact.  After all the rain, wind, and the “it should be flyable” by the organizers, it was, and we were loving and relishing in the morning air. 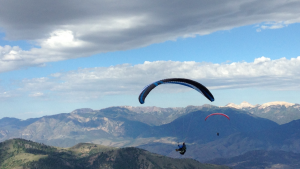 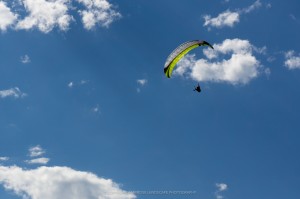 In the end it was worth all the driving and waiting.  It seems like after trips like these I get more out of the discussions we have while we para-wait.  We all shared many laughs and good times, shared lessons we’ve learned along the way and made many new friends and memories.  We learned that although some may feel comfortable flying in certain conditions, we each must look to our own experiences and decide what is best for ourselves regardless as to what other are doing.  I will forever be a student of the sport and the Pioneer Day Fly in hasn’t seen the last of me.